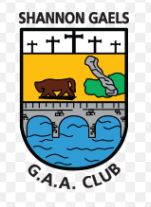 Back to Play started off for our ladies with the Gannons Eggs sponsored U16 Div 1 championship last Tues in Johnstown. Shannon Gaels ran out winners on a score line of Shannon Gaels 6 15 Clan na nGael 1 12. Next game is in Croghan on Tuesday at 7pm v St Bridgets.

Next up was Ros Bowl sponsored Div 2 u14 championship where our girls met Roscommon Gaels in Croghan. In what was a tough battle Shannon Gaels lost with the final score of 5 02 to 7 09. They will play Castlerea St Kevin's in Castlerea on Thursday 30th July at 7pm.

The U12 girls began their campaign on Sunday evening in the King & Moffat sponsored league away to St Barry's. St Barry's finished as victors on the day. U12s next game is away to Roscommon Gaels on Sunday 2nd August at 6pm.

Congrats to our mens senior team & management who got off to a winning start in the championship defeating Ballinameen in Ardcarne Park on Sunday last by 1-15 to 1-10(see match report). A minutes silence was observed before the game for the late Fr Martin Mulvaney. Thank to you St Michaels or their hospitality.Next Sunday sees Noel and his charges take on St Barry's in Croghan time to be confirmed.

Shannon Gaels mixed U12 team played Elphin/Ballinameen on Saturday in first round of Summer League. They are out again next Saturday playing Kilbride in Kilbride at 11.30am.

Thanks to everyone for your support, enter draw at https://www.404020.ie