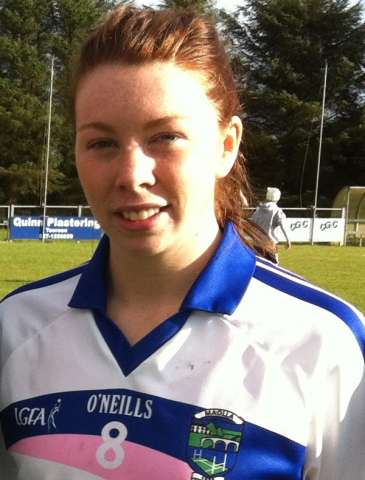 Age: 21 Position: Midfield Occupation: Student Achievements: 1 All Ireland Post Primary Schools B Title 2010, 2 All Ireland runner-up Titles, 5 Connacht Champion Titles, Intermediate County Champions 2012, U-14 2004, U-16 2005, 2006 County Champions, Connacht Post Primary School player of the year 2010 When did you start playing Ladies Gaelic Football: When I was 9 High Point of Career to date: Winning the Post Primary Schools All Ireland Final during my last year at Mount Saint Michael and being captain. Biggest Disappointment: Losing the All Ireland Colleges Semi Final with UL ladies in the Oâ€™Connor Cup Favourite Player: Female: Fiona McHale Male: Richard Bell Favourite Food: Bacon and Cabbage Favourite Ground: McHale Park, Castlebar Person you would most like to meet: Katie Middleton One rule you would like to change in our game: The Sin Bin Influence on your career: My brother, he forced me to go in goal when I was younger and thatâ€™s what sparked my interest in Ladies Gaelic Football.